Existing organ pedalboards are relatively easy to adapt for use in a Hauptwerk virtual pipe organ.  This page describes how I adapted a pedalboard from my old Allen C-3 organ.  I have since constructed a new pedalboard, but the process of adapting the Allen one might be of interest to other virtual pipe organ builders.

Before describing the work on this pedalboard, it is worth noting that this particular pedalboard is known as Allen’s “Princess” pedalboard – something I learned only recently.  The “Princess” pedalboard is, unfortunately, a slightly compacted pedalboard.  It is approximately 4-5 inches narrower than a ‘standard’ AGO (American Guild of Organists) pedalboard (concave and radiating), or other ‘standard’ pedalboards such as those of the German BDO (Bund Deutscher Orgelbaumeister, or Federation of German Master Organ Builders) which includes options for straight flat, straight concave, and radiating concave pedalboards.

I put ‘standard’ in quotes because there are so many ‘standards’ that it is hard to reference only one as being the ‘gold standard.’  Having said that, however, I have always found the Allen Princess pedalboard very difficult to play – much more so than any other ‘standard’ pedalboard whether straight, concave, or concave and radiating.  It has recently been replaced by a new shop-built pedalboard that is straight and concave.

The original pedalboard had multiple mechanical contacts per key and for many years I used these contacts along with some MIDI electronics taken from a very inexpensive USB 30 note keyboard to midify the pedalboard.  I simply hard-wired the pedalboard contacts to the keyboard contacts for the first 30 notes.  This worked reasonably well, but there were always two problems:  first, one of our Maine Coon cats has remarkably downy fur which gets everywhere, including into the pedalboard contacts making them unpredictably intermittent, and second, the mechanical contacts were designed to switch voltages higher than the 5 volts of the USB keyboard, and therefore had to be cleaned fairly often with a key contact cleaner to maintain good performance.  Unfortunately, I have no photos of this original arrangement. 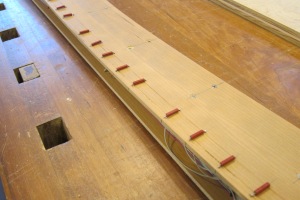 To overcome these problems, later I decided to upgrade the keyboard using magnetic reed switches which seem to be the most commonly used option for pedalboard adaptations.  There is a wealth of information in the forum on the Hauptwerk site on various ways to do this.

After cleaning and applying new finish to the pedalboard, I chose to use reed switches from Testco.com (part number CT10-1040-G1) because their reed switches are encased in rectangular plastic cases which makes them much more robust than those that are glass encased.  Although they are designed to be mounted on circuit boards, they are relatively easy to mount in various other ways.  I removed the original mechanical contacts from the pedalboard and used a 1/4″ piece of plywood attached to the original crosspiece to mount the reed switches.

Wiring under the reed switches, including the breakout board (one for every 8 keys)

Each switch was prepared by soldering a wire on each end and passing the wires through small holes in the plywood.  Each switch was additionally held in place with a small amount of hot-melt glue.  The wires were connected to Midi Gadgets Boutique  bo10 breakout adaptors which were in turn connected by 10 conductor ribbon wires to sm8x8 scan matrix board also from Midi Gadgets.  For convenience in connecting to the main organ case, the output from this board was passed through a standard D-25 connector and eventually to a hwce-max MIDI board also from Midi Gadgets.

Underside of the pedalboard showing magnets, sm8x8 board, and D-25 connector.

The reed switches are activated by 1/8″ cylindrical magnets from Apex Magnets that are attached to screws on each key just above each reed switch. (They are just visible on the head of each screw in the photo.)

Magnets on screws for each key

The screws were initially adjusted up and down to set ‘firing point’ for each pedalboard key.  Once adjusted, a drop of shellac was placed on each magnet to assure that it would be held in place.  After working out the initial adjustments, the pedalboard proved to be 100% reliable.

There are many possible ways to mount the reed switches and magnets which can make it very hard to determine which way is best and most reliable in any given situation.  I used a technical guide mentioned on the Hauptwerk Forum to help make decisions on how to best configure the switches and magnets.  The overall configuration I chose was designed to eliminate the possibility of the magnets traveling too far and switching the note off.

Aside from being too compact and (at least for me) more difficult to play, this pedalboard served me well for several years.

This site uses Akismet to reduce spam. Learn how your comment data is processed.