Recently I’ve been experimenting with some antique molding planes; some are are termed “complex” because they combine two or more basic shapes to create an entire profile, while others are termed “hollows and rounds” and create only simple convex or concave profiles.  The hollows and rounds can be used in conjunction to make more complex moldings.  Most of my antique planes were purchased for about $10-20 each years ago and have proved useful from time to time, especially when I didn’t have (or didn’t wish to purchase) a particular router bit or shaper cutter.

I have only one 18th century plane and I considered it to be a good deal at $65 about 20 years ago partly because it was dated so early, but mostly because it created a beautiful ogee profile that happened to match one that was to be used in a house my wife and I were building at the time.  This house required literally thousands of feet of this molding, and for practical reasons most of it was produced by a standard shaper cutter, but the 18th century plane was used to create the molding in a few special places such as the fireplace surrounds.

I have always been struck by the fact that the 18th century plane gets the details right while the standard shaper cutter is at best just “OK.”  Both profiles are shown below 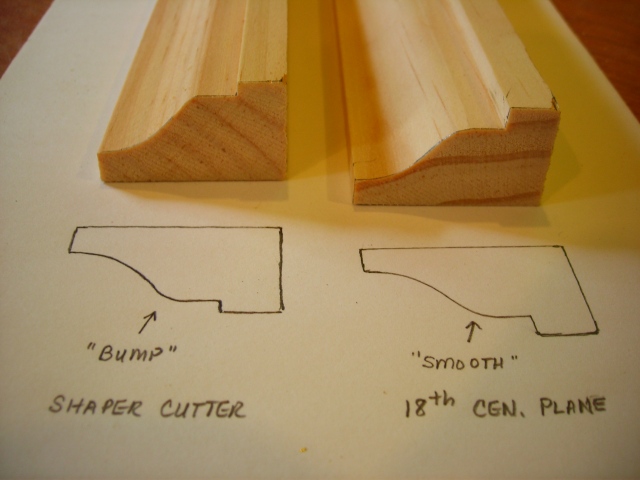 The 18th century plane makes a nice smooth transition from concave to convex while the shaper cutter creates more of a “bump” rather than a convex surface.   The smooth transition is pleasing to the eye and has a sort of relaxed feeling.  In contrast the “bump” transition is kind of abrupt and not especially pleasing.  The difference between these two profiles at the maximum point of difference is only about 3/32 of an inch, but the visual difference is far greater.

The “industrial” shape of many cutter heads or router bits tends to be determined by practical matters such as relief angles, fragility of carbide edges, etc. whereas the profiles of the older hand molding planes were determined solely by the beauty of their curves.  I’ve often wanted to re-grind this shaper cutter head so it would be more like the molding plane profile, but unfortunately the cutter head needs more, not less, steel at the transition point.

Good furniture deserves care in creating the molding profiles.  Most of the profiles on my furniture are designed and scaled specifically for that piece.   Sometimes industrial cutter heads or router bits are able to produce the desired profile (and perhaps save time if more than a few feet of molding are required), but I think molding planes (even just a quarter set of hollows and rounds) allow for much more creativity and flexibility.

Up until a few years ago, it was relatively easy to find matched pairs of hollows and rounds locally, but my two favorite antique stores (with woodworking tools) are no longer in business.  After much searching on eBay and other internet sites without much success, I recently decided that it would make the most sense to make a quarter set of hollows and rounds (1/8″, 1/4″, 3/8″, and 1/2″ –  commonly numbered as #2, 4, 6, and 8).

Many years ago I made a couple small beading planes by attempting to copy some existing planes with larger profiles.  They were fitted with reshaped antique irons (which could often be found at flea markets) and were functional, but hardly in the same class as the originals.

In the past few weeks I have made pairs of #6 and #8 hollows and rounds which are shown below.  I also modified a #11 hollow to match an existing #10 round (a relatively easy way to get matched planes.)

I’m looking forward to making the #2 and 4 pairs in the near future and using this set of hollows and rounds on my next piece of furniture.

For anyone awaiting the next “design” post, I’m working on it, but reducing Christopher Alexanders concept of “Centers” and their “15 Properties” to blog size is a daunting task and I want to do it right because I think he has captured the essence of good design in his writings.