Workbenches and Our Work

Posted on December 5, 2011 by Stuart Blanchard

The workbenches we use shape and influence the type and quality of work we are able to do more than we may realize.  My first workbench was a light-weight, portable, foldable Black and Decker Workmate.™  With this bench, a few hand tools, and a skill saw I was able to build a much needed bookcase which has survived to this day and and now houses my wife Judy’s collection of sewing books.  The Workmate ™ was a vast improvement over working on the floor but it was very limited when it came to learning how to finer joinery like dovetails.

After working on a couple benches made in the “half sheet of plywood and framing lumber” category, I moved on to my first “real” workbench which was a Scandinavian style bench based on plans in the classic woodworking set “Tage Frid Teaches Woodworking.”

Building this bench was at the time a very challenging, but also very rewarding project.  Although somewhat short and lightweight, this bench (along with Tage Frid’s books) gave me the opportunity to explore better joinery and other techniques associated with fine woodworking.

I must confess to being more or less a book addict, and one book always leads to another.  One of these other books was Scott Landis’ “The Workbench Book.”  I remember clearly the day this book arrived and I sat staring at the Hancock Shaker Village workbench featured on the dust cover.  I remember thinking “This is the workbench I want to work on – no questions about it.”  For days I pondered how I might be able to make a bench as large (meaning expensive!) and complex as this one. I began to ponder that pile of “junk” cherry (leftover from a whole-lot purchase) and whether or not it might be workable for the frame.  I also had a very large old maple counter top that just might work for the top.  After much planning and consideration I concluded that I could sell Scandinavian bench to fund the required vises and purchase any additional lumber needed “as funds permitted” (which, of course, always means, “as soon as possible!”)

Although I scaled down the original bench to a more manageable 9‘ long x  34” deep bench, it was still rock solid and weighed about 450 lbs.  To my delight it handled items from small to large with great ease and greatly facilitated improving my skills as a woodworker.

This Shaker style workbench and I developed a long-term and very productive relationship until the year when we moved to a different location where my shop space was less than half the space I had become accustomed to having.  After much frustration over working space, I opted to build a smaller bench. The Shaker style bench found a nice home at a nearby woodworking school, but even as it was being disassembled for transport, I knew I would be building another one sometime in the future. 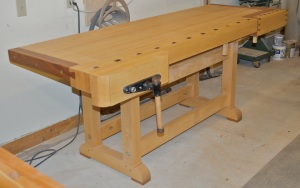 The new bench I built was a very traditional woodworking bench.  Its design and size were derived from numerous sets of published plans and woodworking articles in various magazines, and like the Shaker-style bench, it too proved to be a very functional bench which I used for about 5 years – but the older bench was never far from mind.

After our oldest son Tristan was in college and when our youngest son Brendan reached college age, my wife and I began discussing preliminary plans for a retirement house even though it would be several years away.  Our current Bow-roofed cape has been a great house to live in, but from the beginning we recognized it was designed for raising children, not for retirement.

Given the present costs of construction, utilities, etc. it became clear that we should think along the lines of “small is beautiful” and begin to plan accordingly.  This prompted me to start thinking about a future shop from a much different perspective, and also resulted in my making significant changes in my current shop. (But that is a story that deserves a separate post some day!)

As I thought about a future shop, the longing for another Shaker-style bench became too hard to resist.  Plans began in earnest for re-building the Shaker-style bench and last Spring I began construction of the new bench.  Like the first bench, the completion of this bench was dependent on the sale of the traditional bench (which eventually found a great new home in a Connecticut shop).  The new bench was completed earlier this Fall and has been in constant use since then for some personal work (but not yet for any clients – see Woodworking and Hibernation.)

Working on this bench has been like renewing an old friendship, but with improvements.  The new bench incorporates some features like full extension drawers on heavy-duty slides, a thicker top than the previous bench, and higher quality vise hardware.  I think it must weigh over 500 lbs loaded, and it is ideal for hand-planing and other hand work.  It will probably be the last bench that I will ever build, but I know it will be a joy to work on in my “improved” current shop and in any future shop as well.  Like the other benches, I’m sure this one will facilitate me in growing further as a woodworker.  More information on this workbench can be found here.

Cabinetmaker
View all posts by Stuart Blanchard →
This entry was posted in Workbench. Bookmark the permalink.

8 Responses to Workbenches and Our Work

This site uses Akismet to reduce spam. Learn how your comment data is processed.